How shall we then live? A question for the ages, as the Jews watched the temple being destroyed. The answer can be found in Jesus alone. 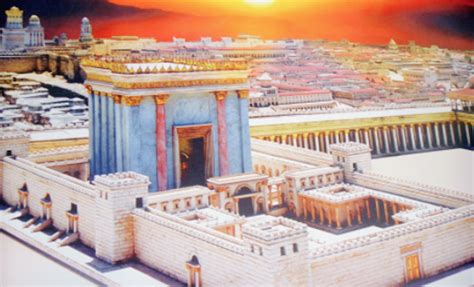 Table of Contents hide
1 In the beginning
2 Shadows and dust
3 Honest misunderstanding?
4 Accepting the imitation
5 Built to last
5.1 One third Temple only
6 Like sheep among wolves

Before there was the Temple, there was the Tent of Meeting. Before the Tabernacle in the wilderness, there was Beth-El. There, God’s servant spoke to Him in Spirit. In turn, He answered in Spirit and in Truth. Solomon’s Temple replaced the Tabernacle. Destroyed because of the people’s disobedience. The people rebuilt the Temple. However, because of disobedience, it was once again destroyed. Now both Believers and Jews alike await the final third Temple.

Just like anything made by men, the second temple also did not last. After the prophecy of the coming Messiah had been fulfilled, the Lord kept His word and the Temple was destroyed once again.

However, something was different this time. The people scattered to the winds and to the four corners of the earth. Many of them were taken to Rome. They were to become slaves. Others, put to death. Although any hopes of rebuilding the Temple had all but vanished, by some type of miracle, “Jewishness” survived.

To the utter dismay of the Jewish people, millennium-old Temple Judaism came to a sudden and abrupt end. The sect of Judaism that depended on the Temple itself, the Sadducees, disappeared; the Essenes, that preached against the corruption of the Temple, lost their raison de vivre. This left only the Pharisees. These would become what we know now as the rabbinical schools. Also, a new Jewishness also appeared. Christianity.

Although no rabbinical scholar would admit, Christianity is Judaism. The reason for not agreeing on this point is purely of a personal nature. Personal in this context refers to Jesus. There is only one difference that separates Temple Judaism from Church Age Christianity. While Jews are still waiting for the Messiah to their own detriment, Christians believe the Messiah has come.

All else being equal, Christianity is the logical next step of historic Judaism. This is in a very crucial way very unfortunate. I say this because they are scheduled to accept the imitation over the real thing. When the antichrist comes, their eschatology will resemble very closely our own. Obviously with their tragic misunderstandings built in.

When the antichrist arrives on the scene they will accept as completed all of the Scriptures that Christians already know as fulfilled. This counterfeit Messiah, I believe, will not be Jewish. Neither will he adhere to the ways of his forefathers. Scripture even references him not being…very manly.

Essentially, there are two types of third Temple believers in this world. On the one hand there are those waiting for the Temple to be built again. On the other hand, although they might not actually be aware, Christians believe it will descend from Heaven in the the form of the Heavenly Jerusalem. So the question is, “who’s right”? Both are.

Scripture tells us clearly in Daniel 11 that the antichrist will sit in a physical temple and declare himself to be God. This will come with the initial adoration of the Jews. But in the fullness of time, as Zechariah 14 shows us, Jesus will return and rule the Earth from the Mount of Olives. Having destroyed the antichrist He will bring down the new, permanent, Jerusalem. Enthroned in His rightful place, He will wipe “every tear from their eyes” (Revelation 21).

One third Temple only

Here’s the clincher. There are only two possibilities for who is reading this post. The first option is that you’re waiting for the third Temple. Both Christians and unbelievers alike are on this Earth together at this point. The other possibility is that you’re living in a time of it being physically present. If the second possibility is true, then you have missed the Rapture of the Church. It also proves that no one bothered to take down this post, at which point I’m insulted. However, I’m glad you’re here. The people that went missing around you haven’t vanished. They’ll be back soon. Then, you’ll see what the real Temple of God looks like! But this is your opportunity to repent. Say these simple words, from the heart:

I repent of my sins. I agree with you that I sinned against You and Your perfect Law. I receive you as Lord and Savior of my life. I accept the free gift of Salvation. I know that it is not by anything that I have done that I have deserved this. I welcome you into my heart, my mind and my life. I thank you for Eternal Life that you have provided for me.

Friend, if you have said that simple prayer, from your heart, you are born again. Whether you are in the Tribulation right now or still awaiting the Rapture of the Church, we want to encourage you. Find a Bible-believing, Spirit-filled church and look for ways to serve God by bringing this Gospel to others in your life.  God bless you